18For Christ also suffered once for sins, the righteous for the unrighteous, that he might bring us to God, being put to death in the flesh but made alive in the spirit, 19in which he went and proclaimed to the spirits in prison, 20because they formerly did not obey, when God’s patience waited in the days of Noah, while the ark was being prepared, in which a few, that is, eight persons, were brought safely through water (ESV).

This is a strange text, and a more obscure passage, perhaps, than any other in the New Testament, for I do not certainly know what St. Peter means. At first sight, the words import as though Christ had preached to the spirits — that is, the souls which were formerly unbelieving at the time Noah was building the ark; but that I cannot understand, I cannot even explain it. There has been no one hitherto who has explained it. Yet if any one is disposed to maintain that Christ, after that He had suffered on the Cross, descended to these souls and preached to them, I will not dispute it. It might bear such a rendering. But I am not confident that St. Peter would say this (Luther 2009, of 1 Peter 3:18-21, emphasis added).

These are among the most difficult verses in the New Testament to interpret. Commentator, D. Edmond Hiebert, observed, ‘Each of the nine words in the original has been differently understood’.[2] They are difficult because of these three questions that need answers:[3]

(a) About whom was Peter speaking when he wrote of the ‘spirits’ to whom Christ made this proclamation (v. 19)?

(c) What was the content of the proclamation? Was it a Gospel announcement or something else?

(d) When did these ‘spirits’ fall through disobedience?

1.1 Christ preached to the dead

Those who interpret ‘the spirits in prison’ this way maintain that during the time between Christ’s death and resurrection he went to the realm of the dead and preached to Noah’s contemporaries:

This group is subdivided by various opinions on the nature of this proclamation. (1) Christ’s soul ministers an offer of salvation to the spirits. (2) He announces condemnation to the unbelievers of Noah’s time. (3) He announces good tidings [good news] to those who had already been saved (Blum 1981:241).

1.1.1 Christ offers salvation to those in the realm of the dead

This would possibly harmonise with that statement in the Apostles’ Creed:

… He suffered under Pontius Pilate,
was crucified, died, and was buried;
he descended to hell….[4]

In 1 Peter 3:19 it states that Christ ‘went and preached to the spirits in prison’. Does this refer to Jesus’ descent into hell, as in the Apostles’ Creed? Not at all. I haven’t found any biblical evidence for that conclusion. There is no biblical support for Christ between his death and resurrection or between his resurrection and ascension going down to Hades/hell.

Some suggest that Christ in his spirit preached to Noah’s contemporaries. Let’s wait to see what the biblical evidence demonstrates.

The second interpretation maintains that Christ, before he came in the flesh at the Incarnation, ‘preached in the time of Noah to Noah’s sinful generation’ (Blum 1981:241).

1.1.3 Christ proclaimed to the ‘disobedient spirits’

This third interpretation identifies the ‘spirits’ as the fallen angels to whom Christ proclaimed his victory on the cross. When did this proclamation take place? There are two options: (1) During the three days when Jesus descended into Hades, or (2) During his ascension.

This third position seems to be the option that Peter teaches in 1 Peter 3:18-4:6. ‘After Christ’s death, he made a victorious proclamation to the fallen angels’. This is defended and developed in this passage that goes through to 4:6 (Blum 1981:241).

Recent commentators teach that the resurrected Christ, during his ascension to heaven, proclaimed to imprisoned spirits his victory over death. The exalted Christ passed through the realm where the fallen angels are kept and proclaimed his triumph over them (Eph 6:12; Col 2:15). This interpretation has met favorable response in Protestant and Roman Catholic circles and is in harmony with the teaching of the Petrine passage and the rest of Scripture (1986:147-148).

See also Barnes’ Notes on 1 Peter 3 for a detailed discussion of v. 19.

2. Take note of these facts

According to v. 18, ‘to bring you to God’ was the reason for Christ’s death.

The NIV translates v. 18 as, ‘For Christ also suffered once for sins, the righteous for the unrighteous, to bring you to God. He was put to death in the body but made alive in the Spirit’.

The NIV translates Spirit with a capital ‘S’. So, was Jesus’ body crucified and he was made alive ‘in the spirit’, small ‘s’? The ESV, Geneva Bible, LEB, NABRE, NASB, NRSV, and RSV translated as ‘spirit’ with a small ‘s’. Literally the Greek means, ‘Put to death in flesh, made alive in spirit’. Therefore, Blum (1981:242) gives this technical reason for rejecting the NIV translation

To translate one member of the antithesis [body vs spirit] as a dative of sphere or reference and the other as a dative of cause is inconsistent. It is best to take both as datives of reference (or “adverbial” or even “of sphere”) and to translate both “in the sphere of” (Blum (1981:242).

3. When was the proclamation made?

Verse 18 says Jesus had been ‘made alive’, so this proclamation took place after his resurrection. I can’t find biblical evidence to support Christ’s ‘descent into hell’ between death and resurrection.

So Jesus must have gone to where these were located. We are not told where it was so we should not speculate. We can’t walk into a room of some confined space and discover these fallen, disembodied spirits.

What is meant by the word preached? The verb stands by itself, so that we are unable to determine the content of preaching. In brief, only the fact of preaching, not the message, is important. That is, we understand the verb preached to mean that Christ proclaimed victory over his adversaries. In his brevity, Peter refrains from telling us the context of Christ’s proclamation. We would be adding to the text if we should interpret the word preached to signify the preaching of the gospel. “Hence we may suppose with reason that it is the victory of Christ over His adversaries which is emphasized in 3:19, not the conversion or evangelization of the disobedient spirits.”[6]

4.1 The verb used tells something

The usual Greek word ‘to evangelise’ (euangelizw) is not used here but keryssw, which means ‘I proclaim/herald’. So the choice of the latter verb means that Christ came, not to preach the Gospel to spirits. What could that proclamation be?

This is one of the easier parts to interpret. Verse 20 states ‘they formerly did not obey, when God’s patience waited in the days of Noah, while the ark was being prepared’ (ESV). So at the time of Noah, these beings were disobedient and the Flood judgment came.

This judgment of the Flood is a warning to human beings that there is going to be a judgment of the disobedient, unrighteous world at Jesus’ second coming. This is stated in verses such as Matt 24:37-41 (ESV) and 2 Peter 3:3-7 (ESV). Noah’s ark that saved 8 people from the flood waters is a symbol of the salvation available in Christ right now.

First Peter 3:20 states who the ‘spirits’ are. They are those people who ‘formerly did not obey, when God’s patience waited in the days of Noah, while the ark was being prepared, in which a few, that is, eight persons, were brought safely through water’ (ESV).

They were not angelic spirits but the spirits of the disobedient people who died at the time of Noah’s flood.

5. The nature of the prison

Another commentator wrote: ‘The prison confining the unbelieving spirits is not a reform school, but a penitentiary for life’ (Engelder 1945:381).

From the time of the early church fathers until the twenty-first century, there have been two main interpretations of 1 Peter 3:19:[8]

6.1 Firstly, Jesus preached to the departed spirits NOW in prison.

Our Lord, through Noah, preached repentance to the people of Noah’s time. There is no association with the doctrine of ‘descent into hell’ in this interpretation.

6.2 Secondly, what Jesus did when his body was in the grave.

This is the most popular interpretation from the Fathers to Luther and a large number of contemporary interpreters. It is claimed that ‘this is the most natural construction to put on the words “in which also” (i.e. in spirit)’. It is associated with Jesus’ being ‘quickened in spirit’.

So, he went from his death and the spirits were alive when Christ preached to them. His spirit, ‘disengaged from the body’, went to the place of other disembodied spirits and proclaimed certain news. The content of this proclamation was not stated but 1 Peter 4:6 (ESV) points to Gospel preaching:

For this is why the gospel was preached even to those who are dead, that though judged in the flesh the way people are, they might live in the spirit the way God does.

The prison is not ‘a place of safe keeping’ for both good and bad spirits. Although ‘prison’ is used 28 times in the NT, not once is it a place of protection but twice (Rev 18:2) it is used as ‘a cage’.

The proclamation made is not of the Gospel because of the verb used kerussw (not euangelizw). It is an announcement – maybe of the victory by Jesus – to those unbelievers who did not obey with repentance in the time of Noah. However, the exact content of the proclamation is not stated in the text. 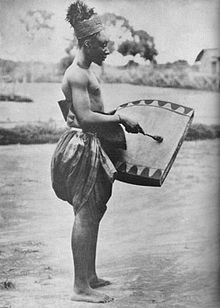 Jesus did not descend into Hades and make a Gospel proclamation to the fallen angels. However, he went to the ‘prison’ where deceased spirits were and made an announcement like a town crier would do in the first century.

‘The spirits in prison’ refers to the people who had died and were now in hell/Hades, awaiting judgment. The prison is a representation of hell. However, the people in the ‘prison’ are those who did not repent in Noah’s day and died. Their spirits went Hades.

[8] These 2 points are based on Ellicott’s Commentary for English Readers. Available at: ibid.

[9] Note that this commentary does not present continuous numbering but reverts to new numbers with each Bible book. The numbers for Jude are continuous with 1 & 2 Peter. 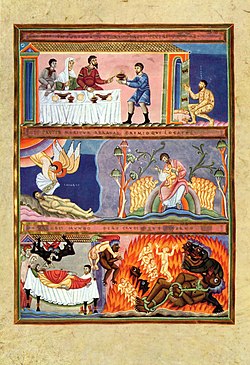 Lazarus and the Rich Man (illumination from the Codex Aureus of Echternach).