Bill Muehlenberg of Culture Watch, a cultural apologist in Australia, wrote a provocative and needed article, ‘On Expository Preaching’.[1] I encourage you to read this brief article. In it, he stated:

Our churches today are therefore filled with people who are biblically illiterate. A good part of the reason – and blame – for this is because our pulpits are not feeding the people. We have far too many topical sermons and way too little actual preaching of the text itself.

One of my favourite Old Testament professors, Walter Kaiser was a real stickler for “keeping the finger on the text”. He knew the value of expository preaching, and the need to be text-orientated, not topic-orientated. I once heard him say this: “I preach a topical sermon once every five years – then repent of it immediately!”

David Hunt, a Bible teacher in his local church in Brisbane, provided some feedback on Bill Muehlenberg’s article:[2]

Thanks for your helpful article Bill. I agree wholeheartedly that we need more expository preaching. I’d be interested in yours & others comments: I’ve NEVER heard an expository sermon in a Charismatic church. I serve the Lord as a Bible teacher in an Evangelical church, but over the years have visited Charismatic churches (eg. Hillsong in Sydney & Brisbane). I’ve never heard a preacher in one of those churches teach verse-by-verse through a passage. Instead, the norm is a topical message with a few Bible verses thrown in. Interested in others’ observations.

Why expositions are absent in many charismatic churches?

I agree that there are few expositors in charismatic ranks. I’ll include Pentecostals also in my comments. One of the finest Pentecostal expositors I’ve heard in Australia was my friend and colleague, the late Aeron Morgan (formerly Toowoomba AoG and principal of Commonwealth Bible College – AoG – when it was at Katoomba NSW). Aeron was a Welshman and an outstanding Pentecostal expositor. From 1977-1980, I was on the faculty of Commonwealth Bible College when Aeron was principal. I also was there from 1985-87.

However he was one of the Lord’s special preachers, in my view. He went to be with the Lord in 2013.

I am disturbed and distressed by the trends away from the Scriptural position and the more existential climate now apparent on the neo-Pentecostal Church scene. I make an effort to speak to this as a serious concern….

There is observed an increasing readiness to accept all manner of strange teachings and questionable manifestations as being of God, the naïve and mindless validating of all kinds of weird and abnormal phenomena, without the applying of any Biblical test to them. This is most serious and needs addressing urgently (Morgan 2005:39, 45).

Aeron wrote of ‘the abnormal conduct of misguided Charismatics’, which is a gentle and mild way to describe the chaotic behaviour that I encountered in that charismatic house church in Brisbane (Morgan 2005:172). He wrote:

It appears that in recent times something of this dubious conduct has taken place where people have witnessed in the meetings certain behaviour with others which has been claimed to be the work of the Holy Spirit, and consequently they in turn have given themselves to ‘manifesting’ in a like manner. It has not been a work of the Holy Spirit, but the result of psychological manipulation, autosuggestion, and in some instances what appears to have been certain hypnotic influence. This is very serious, for it reveals two things:

(a) How easily many people are accepting teachings and practices on the strength of what they are told or witness, without any discernment.

(b) It shows up the serious lack of discernment and judgment of these things by those leaders who profess to be “full of the Holy Ghost”. It can only be described as gross irresponsibility on the part of those who ought to know better. Their failure cannot be excused. It must be condemned. Such persons are not fitted for the role of leadership. Leaders in Christ’s Church are to be “Watchmen”, considering as a divine obligation the spiritual welfare of His people before any personal interest (Morgan 2005:177-178).

What is your view?

I would be interested in knowing why there is not an expository emphasis in Pentecostal-charismatic circles. I have my theories that need to be tested with evidence. These include:

(1) The teaching of expository preaching is in decline in our theological colleges. If the colleges are not convinced of its benefits, the skill will not be passed on.

(3) Some Pentecostal-charismatic preachers I’ve met and heard consider that expository preaching is too legalistic and they prefer Spirit-anointed ad-lib around topics and occasional verses. That’s what a few have told me. I need to add that some of the worst preachers I’ve heard are among those who ad-lib around topics and don’t seem to deal with the meat of the Word. Some of these are very incompetent presenters whose skills could be improved by attending a Rostrum Club or a Toastmasters Club.

(4) For me this is the BIG issue. I have serious questions about whether some of these topical preachers have as high a view of Scripture as they do of the Holy Spirit’s ability to influence ad-lib preachers. Their doctrine of the Holy Spirit (pneumatology) seems to be one of the major reasons for not using expository teaching.

I’d be interested in hearing what others think on why there is a demise of expository preaching with charismatic-Pentecostals. But that down-turn is just as great with the evangelical Baptists, Wesleyan Methodists, Brethren, and Churches of Christ churches that I’ve visited in my region of northern Brisbane.

I, as a convinced evangelical charismatic, am committed to being an expositor of Scripture whenever I’m asked to preach. I’m an independent research living in Brisbane, Qld, Australia and am currently writing a PhD dissertation in NT (dissertation only in the British system) so have to restrict my preaching activities for a time. 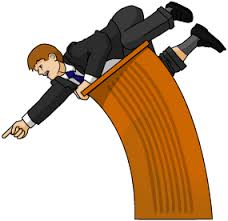 Back in 2010 when Bill Muehlenberg first uploaded this article, I responded with the following comment:[4]

I applaud your call to get back to preaching expositionally as a primary means of getting the church back to solid grounding in Scripture. My wife and I will not regularly attend a church that does not engage in expository preaching. But it is getting more difficult to find such as the seeker-sensitive philosophy does not want to favour such an approach. However, a warning must be given not to bore God’s people with such expositions.

At the time of writing this response, I attended Fraser Coast Baptist Church (Hervey Bay, Q, Australia) where Pastor Steve Sauvageot was an excellent expository preacher. As the time of this writing, he was preaching through the Book of Ephesians. One of the keys to Steve’s expositions is that he not only expounds the text, but also makes application to the people, which is a strong point that you have made in your advocacy of expository preaching. The senior pastor is a gifted expositor, but his two associates are NOT and that led me to write this article, “It’s a sin to bore God’s people with God’s word” after I heard these other two preach. I’m convinced that all preachers can be taught to be expositors without denying their unique gifts.

In my response to Bill Muehlenberg, I wrote: One of the expository texts you recommended, Bryan Chapell (2005), is the one I most highly recommend and is the basic text I use when training others in expository preaching. Chapell wrote that ‘the technical definition of an expository sermon requires that it expound Scripture by deriving from a specific text main points and subpoints that disclose the thought of the author, cover the scope of the passage, and are applied to the lives of the listeners’ (Chapell 2005:132).

I pray that the pastors who read your website will understand that the critical importance of the need to “preach the Word” (2 Tim. 4:2) will help get evangelicals back on track with foundational biblical theology.

I have also written an article with the title, ‘It’s a sin to bore God’s people with God’s word‘.