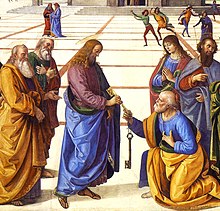 [According to Catholic doctrine, the popes are successors of Saint Peter (kneeling, right), courtesy Wikipedia]

I have been to Pentecostal-Charismatic churches where this verse has been used as a basis to bind the demon in a person and loosing a person from demonic bondage. I refer to Matthew 16:19 (ESV). Is that the meaning of the text?

1. What is binding and loosing?

There is no scriptural command to bind Satan, nor is there any biblical example of the practice. Satan remains at large as the “prince of the power of the air” (Ephesians 2:2) until he is chained or bound (by an angel, not a human being) during the millennial reign of Christ (Revelation 20:1-3). The disciples cast out demons, but they never bound them or Satan (MacArthur 1969).

The contentious statements include:

‘I will give you the keys of the kingdom of heaven’.

‘Whatever you bind on earth shall be bound in heaven’.

‘Whatever you loose on earth shall be loosed in heaven’.

2. I will give you the keys of the kingdom of heaven

In Matt 16:19 we have the ‘figure of a building with keys to open from the outside’. However, Rev 1:18 and 3:7 state that the Living One who was dead and is now alive holds the ‘keys of death and Hades’ and the ‘keys of the kingdom of heaven’.

In Matt 16:19, Jesus hands the keys of the kingdom over to Peter. This is not to make Peter the first pope. From Matt 16:18 we learn that Jesus hands the building (oikodomew) over to Peter for him to be a ‘gatekeeper’ or ‘steward’. The same power was given to the other apostles and belongs to every believer down through the centuries.

We know in the context this is not promoting Peter the pope because the disciples were having an argument over who would be the greatest in the kingdom and they presented this dispute to Jesus (Matt 18:1). They were at it again in Matt 20:21.

Surely these verses confirm that Jesus did not make Peter the foundation of the church and the first pope.

Peter held the keys just as every preacher-teacher does in proclaiming the Gospel. Alfred Edersheim in his massive exposition on the life of Christ expounds the significance of 16:19,

Viewing ‘the Church’ as a building founded upon ‘the Petrine,’ it was not to vary, but to carry on the same metaphor, when Christ promised to give to him who had spoken as representative of the Apostles – ‘the stewards of the mysteries of God’ – ‘the keys of the Kingdom of Heaven.’ For, as the religious unity of His disciples, or the Church, represented ‘the royal rule of heaven,’ so, figuratively, entrance into the gates of this building, submission to the rule of God – to that Kingdom of which Christ was the King. And we remember how, in a special sense, this promise was fulfilled to Peter. Even as he had been the first to utter the confession of the Church, so was he also privileged to be the first to open its hitherto closed gates to the Gentiles, when God made choice of him, that, through his mouth, the Gentiles should first hear the words of the Gospel [Acts 15:7] and at his bidding first be baptized (Edersheim 1953:1035).

‘After much discussion, Peter got up and addressed them: “Brothers, you know that some time ago God made a choice among you that the Gentiles might hear from my lips the message of the gospel and believe’ (Acts 15:7 NIV).

So the ‘keys of the kingdom’ of heaven relate to the offer of salvation that any preacher, teacher or disciple can make to encourage all people to go through the gate of salvation to enter God’s kingdom. Jesus reminded us:

3. Bind and loose on earth

Talk about controversy! I have heard them in churches and small groups, ‘I bind you, Satan, in the name of Jesus’. These preachers use verses like Matt 16:19 to support their theology of demonology.

In context, do binding and loosing have anything to do with Satan and his demons?

‘To “bind” … in rabbinical language is to forbid, to “loose” … is to permit’. The verbs for ‘bind’ and ‘forbid’ are future, perfect, indicative, indicating the binding and loosing will be completed – with continuing results. Jesus uses binding and loosing language to all of the disciples in Matt: 18:18. After his resurrection, Jesus’ repeats the same language (John 20:33), indicating this is not the special privilege given to Peter (Robertson 1930:134).

This view also is supported by Friedrich Büchsel in The Theological Dictionary of the New Testament under the entries for dew (I bind) and  luw (I loose) in Matt 16:19 and elsewhere,

Jesus does not give to Peter and the other disciples any power to enchant or to free by magic. The customary meaning of the Rabbinic expressions is equally incontestable, namely, to declare forbidden or permitted, and thus to impose or remove an obligation, by a doctrinal decision (Büchsel 1964.2:60).

So every preacher or disciple who shares the Gospel of Christ for salvation is engaged in binding and loosing.

Satan and his demons are missing from this context. It has everything to do with calling people to repentance (being loosed) and warning them about continuing in sin and the ultimate eternal consequences.

I cannot find any Scripture to support the view that Christians are called upon to bind and loose Satan.

4. Conflict with casting out demons?

How does the above exposition harmonise with the following verses or are they in conflict?[1]

Matt 10:1, ‘Jesus called his twelve disciples to him and gave them authority to drive out impure spirits and to heal every disease and illness’.

Matt 12:27, ‘And if I [Jesus] drive out demons by Beelzebul, by whom do your people drive them out? So then, they will be your judges’.

Matt 17:19-20, “Then the disciples came to Jesus in private and asked, ‘Why couldn’t we drive it out?’ He replied, ‘Because you have so little faith. Truly I tell you, if you have faith as small as a mustard seed, you can say to this mountain, “Move from here to there,” and it will move. Nothing will be impossible for you’.

Mark 3:14-15, ‘He appointed twelve that they might be with him and that he might send them out to preach and to have authority to drive out demons.

Mark 6:13, ‘They drove out many demons and anointed with oil many people who were ill and healed them’.

Mark 9:18, ‘Whenever it seizes him, it throws him to the ground. He foams at the mouth, gnashes his teeth and becomes rigid. I asked your disciples to drive out the spirit, but they could not’.

Luke 9:40, 49-50, ‘I begged your disciples to drive it out, but they could not…. ‘Master,’ said John, ‘we saw someone driving out demons in your name and we tried to stop him, because he is not one of us’. ‘Do not stop him,’ Jesus said, ‘for whoever is not against you is for you’.

Luke 11:19, ‘Now if I drive out demons by Beelzebul, by whom do your followers drive them out? So then, they will be your judges’.

Acts 16:16-18, ‘Once when we were going to the place of prayer, we were met by a female slave who had a spirit by which she predicted the future. She earned a great deal of money for her owners by fortune-telling. She followed Paul and the rest of us, shouting, ‘These men are servants of the Most High God, who are telling you the way to be saved.’ She kept this up for many days. Finally Paul became so annoyed that he turned round and said to the spirit, ‘In the name of Jesus Christ I command you to come out of her!’ At that moment the spirit left her’.

5. Genuine conflict or not?

None of these excellent verses above conflicts with the exegesis I provided in Matt 16:19 of binding and loosing. Jesus also used binding and loosing language to the disciples in Matt: 18:18. After his resurrection, Jesus’ repeats the same language in (John 20:33).

If you travelled with missionaries to countries where there is serious demonic activity in the culture, you’d be exposed to the need for exorcism. However, when some of these missionaries return to their conservative churches in the western world, they often avoid talk of the demonic. I spoke with a retired missionary from Brazil who told me of the spiritism in that country and the need for exorcism when a person submits to Jesus Christ. He was involved in a number of such exorcisms.

God certainly gives Holy Spirit power for demons to be cast out, but the passage in Matt 16 did not teach that.

Matthew 16:18 does not make Peter the first pope. Peter was the first to make the formal announcement, ‘You are the Christ/Messiah’.

In handing the keys of the kingdom over to Peter, Jesus was handing them also to every disciple down through the centuries. It is our responsibility to proclaim the Gospel of God’s message of salvation.

To bind in rabbinical language refers to forbidding something while to loose indicates to permit.

The Gospels and Book of Acts give examples of exorcism of demonic spirits. This still takes place in parts of the world. Today, demonic manifestations are seen in various countries of the world, including Ethiopia.

MacArthur, J 1969. Does the Bible teach that Christians can bind Satan and demons? Grace to You (online). Available at: https://www.gty.org/library/questions/QA150/does-the-bible-teach-that-christians-can-bind-satan-and-demons (Accessed 28 January 2020).

[1] The following quotes are all from the NIV.