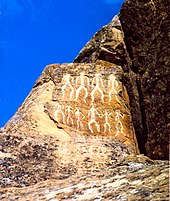 Petroglyphs in modern-day Gobustan, Azerbaijan, dating back to 10,000 BCE and indicating a thriving culture

A teenager asked this question: What is Christian culture? She attended a Christian school and this was one of her assignments.

My immediate response was: What is your understanding of the meaning of culture? There was uncertainty about what elements were included in culture.

Then pursued a discussion of how Jesus fits with all the other gods of other religions. I recommended Ravi Zacharias’s books that addressed these topics:

Oxford dictionaries online give these 3 definitions:

1.1 ‘Culture consists of activities such as the arts and philosophy . . .

which are considered to be important for the development of civilization and of people’s minds’ (Oxford Dictionaries Online 2018. s.v. cullture

e.g. ‘There is just not enough fun and frivolity in culture today’;
e.g. ‘aspects of popular culture’.

Synonyms include both the arts and the humanities.

1.2 A culture is a particular society or civilization . . .

especially considered in relation to its beliefs, way of life, or art.

e.g. ‘people from different cultures.’
e.g. ‘We live in a culture that is competitive’.

1.3 ‘The culture of a particular organization or group . . .

consists of the habits of the people in it and the way they generally behave’.

e.g. ‘She comes from a Christian culture, so you’d expect her to oppose

human beings are not created by chance; they are made in the image of God and so music, art, horse riding and gazing on the beauty of nature have meaning;

Because God has revealed himself through Scripture, God is not silent to all human beings and especially those who have the Spirit of God indwelling them;

Human beings are certain of human and moral values. They are absolutes;

We know the difference among fantasy, fairy tales, history and the reality of Jesus’ actions in the world.

why some human beings are Christians on earth; they are here to glorify God;

It is radically different from much of Australian culture which is godless (secular).[1]

All people live according to their world and life view. Australia’s culture currently is driven by a humanistic,[2] postmodern,[3] godless (secular) system of values.

In simpler language, postmodernism (which we see in art, literature, religion and the mass media) promotes the view you do what is right for you – your own values; there are no absolute standards. Be creative in your interpretation.

Particularly in literature, the intent of the author is ignored. What is important is what I, the reader, do with the text. I interact with the text and place my meaning on it. This element of postmodernism deconstructs language to make it a reader-response to gain the meaning of any written narrative.

The main argument of reader-response theory is that readers, as much as the text, play an active role in a reading experience (Rosenblatt, 1994). This theory rejects the structuralist view that meaning resides solely in the text. Words in a text evoke images in readers’ minds and readers bring their experiences to this encounter. Because individuals have different life experiences, it is almost certain that no two readers or reading sessions will form the exact same interpretation of a text. . . .

As there are as many interpretations of a text as there are readers, teachers should be more receptive to different responses from their students. Rather than focusing on the correct or wrong answers, it is worthwhile helping students explore their reasons for their interpretation of a text (Koay 2016).

Pluralism means we need to live among groups of minorities and let them function according to their values. If they don’t want to mix with us, let them be.

If there are no absolutes, and if we do not like either the chaos of hedonism or the absoluteness of the 51-percent vote, only one other alternative is left: one man or an elite, giving authoritative arbitrary absolutes . . . .
Here is a simple but profound rule: If there are no absolutes by which to judge society, then society is absolute (Schaeffer 1976:224).

Absolutes are rules, values, etc. that cannot change. They apply universally to everyone. When one of the 10 commandments was, ‘You shall not lie’, that is an absolute of God’s values for all believers.

2.2 Example of postmodern, reader-response interpretation of the Bible[4]

Professor of English, Lois Tyson, wrote of the two beliefs shared by reader-response theorists: ‘(1) that the role of the reader cannot be omitted from our understanding of literature and (2) that readers do not passively consume the meaning presented to them by an objective literary text; rather they actively make the meaning they find in literature’ (Tyson 2006:170).

Note her emphases that a reader-response postmodernism is creating or actively making the meaning. Thus, the role of the literary text is not an object to be interpreted but helps the reader to produce meaning, in Tyson’s view. How this happens between text and reader attracts a variety of explanations from theorists.

2.2.1 Summary of the reconstruction evidence

Semiotics is understood as signs in language where anything is standing for something else.

For poststructuralist semiotics (as with Ricoeur, Derrida and Gadamer), signs have broken their ties to what they are supposed to denote.

Semiotics is in contrast with semantics where the latter indicates the relationship between words and meanings.

An issue with poststructuralist theory is that the relationship between speaker and speech perishes with there being no fixed meaning.

Vanhoozer’s thesis is that the author and the sentence are basic to communication. Without them, discussion about other things such as speech acts and meaning are impossible.

There is an overlap of semantics and semiotics as both may depend on a distinction between the sign-system (traffic lights, road signs) and language-system (Thiselton).

Semiotic theory in hermeneutics launches a postmodern understanding of texts with application to John Dominic Crossan’s definition of history.

Some scholars have stated that Crossan applies to texts a “ruthless hermeneutic of suspicion.”

Crossan, J D 1998. The birth of Christianity: Discovering what happened in the years immediately after the execution of Jesus. New York, NY: HarperSanFrancisco.

Schaeffer, F A 1976. How Should We Then Live? The Rise and Decline of Western Thought and Culture. Old Tappan, New Jersey: Fleming H. Revell.

Vanhoozer, K J 1998. Is there a meaning in this text? The Bible, the reader and the morality of literary knowledge. Leicester: Apollos.

[2] Humanism is ‘the principle that people’s spiritual and emotional needs can be satisfied without following a god or religion’ (Cambridge Dictionary 2018. s.v. humanism).

[3] ‘Postmodernism is skeptical of truth, unity, and progress, opposes what it sees as elitism in culture, tends toward cultural relativism, and celebrates pluralism, discontinuity, and heterogeneity’ (Eagleton 2003:13, n.1).

[4] This example is taken from my PhD dissertation, “Crossan and the resurrection of Jesus: Rethinking presuppositions, methods and models.”