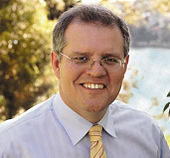 See Acts 5:29 (NLT), ‘But Peter and the apostles replied, “We must obey God rather than any human authority”’. The NRSV has a similar translation.

Prime Minister Scott Morrison says his “faith is not about politics”. . . . Asked directly . . . if he believed gay people go to hell, Mr Morrison replied: “I support the law of the country.”

“I don’t mix my religion with politics or my faith with politics and it’s always been something that has informed how I live my life and how I seek to care for and support others,” he said. “That is what I always seek to do”

The Liberal leader abstained from the final vote on the floor of Parliament.

“It’s law. And I’m glad that the change has now been made and people can get on with their lives. That’s what I’m happy about” (Bagshaw 2019).

2. I find Morrison to be a disobedient Christian

Firstly, ScoMo is to be commended that he abstained from the final vote on homosexual marriage.

However, the position, “I don’t mix my religion with politics or my faith with politics” is in violation of Acts 5:29.

How is it possible for him to have a Christian faith that “has informed how I live my life and how I seek to care for and support others,” and yet not affect how he votes in Parliament.

The biblical view is that “we must obey God rather than any human authority” (Acts 5:29 NLT). Therefore, He is not a holistic believer in Christ. However, I must admit that it’s a tough job being an evangelical, Pentecostal Christian in a secular, democratic society. I’ll be surprised if he survives the next election.

However, some extreme statements have been made about Morrison’s rise as a PM at the last election:

Pastor Adam F Thompson from Voice of Fire Ministries and Adrian Beale from Everrest Ministries told a congregation of Hope City Church that Morrison’s elevation to power was divinely inspired.

Thompson, who says he can interpret dreams and that supernatural signs and manifestations accompany his ministry, said he’d received a message from God that Morrison and the Coalition must win the election (Hutchens 2018).

Is Thompson prepared to make a signs and wonders prophecy for the next Australian election?

Could this be one of those positions where it would be better not to take such a position, even though Christians are desperately needed in the political process?

Do homosexuals go to hell? If a journalist asks this question, how should Scott Morrison reply?

Or do you not know that wrongdoers will not inherit the kingdom of God? Do not be deceived: neither the sexually immoral nor idolaters nor adulterers nor men who have sex with men[1] nor thieves nor the greedy nor drunkards nor slanderers nor swindlers will inherit the kingdom of God. And that is what some of you were. But you were washed, you were sanctified, you were justified in the name of the Lord Jesus Christ and by the Spirit of our God.

Here homosexual male acts are included with other wrong-doing such as sexual immorality, idolatry, adultery, theft, greed, being a drunkard, slanderer and swindler. It doesn’t say such sinners will be sent to hell but that they “will not inherit the kingdom of God.”

What is the message in Romans 1 regarding homosexuality? See Rom 1:21-31 (NIV) where male and female homosexuals “received in themselves the due penalty for their error” (v. 27). They “invented ways of doing evil” (v. 29). What is the result of such actions? “They exchanged the truth about God for a lie, and worshipped and served created things rather than the Creator – who is for ever praised. Amen” (v. 25).

There are consequences for doing such evil. They will not “inherit the kingdom of God” and will receive “the penalty for their error.”

Could this be a job as an MP to avoid? I don’t think so. Instead, ScoMo needs to practise the Matt 10:16 (NLT) principle, “Look, I am sending you out as sheep among wolves. So be as shrewd as snakes and harmless as doves.”

In my view, Morrison has failed to integrate his Pentecostal faith with his day-time job of Prime Minister. At least he took a step in not voting in the final vote on gay marriage. But he admitted his perspective, “faith is not about politics.”

To the contrary, all that he does has to do with his relationship with Jesus. His values must be informed by the Acts 5:29 requirement.

[1] “The words men who have sex with men translate two Greek words that refer to the passive and active participants in homosexual acts.”

Bagshaw, E 2019. ‘I support the law of the country’: Debate over sexuality and religion creeps into election campaign. The Sydney Morning Herald (online), 13 May. Available at: https://www.smh.com.au/federal-election-2019/i-support-the-law-of-the-country-debate-over-sexuality-and-religion-creeps-into-election-campaign-20190513-p51mxm.html (Accessed 16 September 2019).