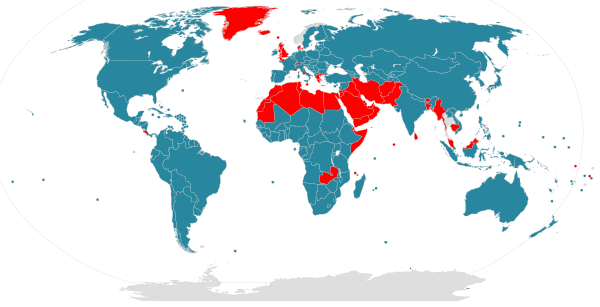 Are secular people religious or not? On Christian Forums, I came across this statement, ‘When I say secular, I mean not religious. A historian or literary critic’ (sculleywr #39). This is not an uncommon view. People think that because a person does not claim any religious allegiance such as Hindu, Christian or Muslim, he or she is not religious – that these people don’t have a religious worldview. This definition of a ‘secular worldview’ states:

The Secular Worldview is a religious worldview in which “man is the measure” — mankind is the ultimate norm by which truth and values are to be determined. According to Secular Humanism, all reality and life center upon human beings. In fact, we act as God.

That’s as religious sounding as any Christian text I could read.

It was German theologian, Karl Barth, who first brought this to my attention. Karl Barth (1963:3-4) wrote of the many theologies in the world and stated that

there is no man who does not have his own god or gods as the object of his highest desire and trust, or as the basis of his deepest loyalty and commitment…. There is, moreover, no religion, no philosophy, no world view that is not dedicated to some such divinity’. This applies to philosophers who affirm ‘that divinity, in a positive sense, is the essence of truth and power of some kind of highest principle; but the same truth is valid even for thinkers denying such divinity, for such a denial in practice merely consist in transferring an identical dignity and function to another object. Such an alternative object might be “nature,” creativity, or an unconscious and amorphous will to life. It might also be “reason,” progress, or even a redeeming nothingness into which man would be destined to disappear. Even such apparently “godless” ideologies are theologies.

The adjective, secular, is derived from the Latin, saecularis, and means ‘worldly, temporal (opposed to eternal)’. What is a secular person’s highest desire or truth? What is the person or thing to whom a secularist holds deepest loyalty and commitment? That is that person’s religion. Why? Dictionary.com gives this definition:

1. a set of beliefs concerning the cause, nature, and purpose of the universe, especially when considered as the creation of a superhuman agency or agencies, usually involving devotional and ritual observances, and often containing a moral code governing the conduct of human affairs.

2. a specific fundamental set of beliefs and practices generally agreed upon by a number of persons or sects: the Christian religion; the Buddhist religion.

3. the body of persons adhering to a particular set of beliefs and practices: a world council of religions.

5. the practice of religious beliefs; ritual observance of faith.

So any one group, including secularists, that has a set of beliefs and practices about ultimate concerns, can be called a religion.

What is the religion of secularists? Dictionary.com wants to define secularism as having no religion:

1. secular spirit or tendency, especially a system of political or social philosophy that rejects all forms of religious faith and worship.

2. the view that public education and other matters of civil policy should be conducted without the introduction of a religious element.

However, these secular people are as religious as any I have met. Yes, secular religionists. Why? Because religion has to do with ‘the cause, nature and purpose of the universe’. What do secularists believe about the cause, nature and purpose of our universe? Most lay the cause with evolution. They are opposed to any supernatural deity being involved. Therefore, secularists hold to the ultimate religion of naturalists. They are anti-supernaturalists. That’s as religious as any Christian or Hindu we could meet. What is the ultimate cause? Naturalism and its outworking through evolution.

I recommend a read of Howard P. Kainz, ‘The Culture War Is Between Religious Believers on Both Sides’. in Touchstone: A journal of mere Christianity. In this article, Kainz cites Ronald Rolhauser who stated (and I agree):

Ideologies of all kinds, from Marxism to secular feminism, substitute a normative theory of history for the Judeo-Christian story of salvation and propose this new story as the story of salvation; secular art turns creativity into a religion whose God is so jealous as to make the old demanding God of Judaism, Christianity, and Islam [sic] appear lax; secular moralists demand a doctrinal orthodoxy (political correctness) which religious fundamentalists can only envy; secular moral zealots continue to find no end of causes that call for religious martyrdom; positive thinking and pedagogues of excellence propose a new religious hope; the cults of physical health, replete with ever more demanding forms of asceticism, replace old spiritualities regarding the soul; ancient animism, the worship of nature, takes on new religious forms; myths and fairy tales replace the old Bible stories; new shrines (from Graceland to Lady Diana’s tomb) continue to appear; and secular forms of canonization, of books and people, do what religious canonization formerly did. Religion is never at the margins. Everyone has a spirituality, including today’s adult children of the Enlightenment.

This data points to the fact that every philosophy or worldview is a religion. Therefore, all people, whether secular, mosque-going or church-going, do theology. They all deal with the worldviews of ultimate reality. They are religious!