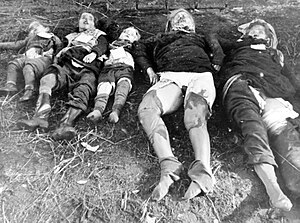 (rape during occupation of Germany, Wikipedia)

The closest I saw a recent secular writer get to what is wrong with our world was Paul Wilson’s article, “The essence of evil.”[i] It was his response to the mass murder and suicide within the doomsday religious cult in Uganda.

He also was provoked by the retired Austrian doctor who was charged with experimenting on the brains of children who had been exterminated by the Nazis. The word, “evil,” came to his mind as he thought on these atrocities.

Evil from a secular view

Paul Wilson didn’t accept the theologians’ views of evil. Rather, he prefers psychologist, Roy Baumeister’s, simple definition that evil is “the intentional serious physical harm of another person or persons.”[ii] Simple it might be, but I am still left with questions: What causes people to want to intentionally harm anybody? Where does the motivation come from?

We need solid answers to these questions if we are ever to get to the heart of greedy, selfish, and violent examples of serious physical harm. If the evils of the Nazis are to be accounted for, and sense is to be made of the Ugandan cult murders and suicides, we must have a more penetrating explanation for the origin of evil than an intentional demonstration of serious physical harm.

That’s a description of what happens when evil is let loose, but it does not get to the core of the problem of evil

A 13-year-old boy phoned me this afternoon. His sister had poked him with a broomstick and he retaliated by thrashing her on the spine with the same stick. She is very sore and beaten. He wanted help.

You don’t have to go to the extremes of the Russian Gulag or Nazi atrocities to know that we have horrible evil in our midst. From where does it come?

Values learned in a Russian prison 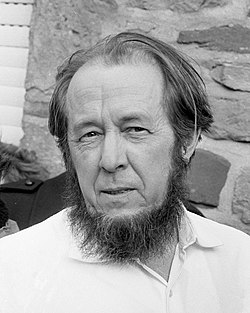 Aleksandr Solzenitsyn, the Russian writer, was exiled for many years after being expelled from the Soviet Union in 1974. His accounts of tyranny under Stalin’s communist regime led to his being exiled from his homeland. He documented “the arrest, enslavement, torture, and murder of an estimated 65 million in Soviet labour camps.”[iii] He spent 11 years[iv] in Soviet prison camps. He writes from first-hand experience of what wicked people in a putrid system can do to people.

His assessment of the state of our world is penetrating, even though it was printed 25 years ago:

If only there were evil people somewhere insidiously committing evil deeds, and it were necessary only to separate them from the rest of us and destroy them. But the line dividing good and evil cuts through the heart of every human being. And who is willing to destroy a piece of his own heart?[v]

He explained how human beings can waiver between doing the good and reverting to the bad.

“During the life of any heart this line keeps changing place; sometimes it is squeezed one way by exuberant evil and sometimes it shifts to allow enough space for good to flourish… At times he is close to being a devil, at times to sainthood… From good to evil is one quaver, says the proverb.”[vi]

Evil is within all of us

Solzhenitsyn’s view of human nature has a strong biblical ring. It was Jesus Christ who knew human nature and cultures thoroughly. Jesus declared:

What comes out of a man is what makes him ‘unclean.’ For from within, out of men’s hearts, come evil thoughts, sexual immorality, theft, murder, adultery, greed, malice, deceit, lewdness, envy, slander, arrogance and folly. All these evils come from inside and make a man ‘unclean.’[vii]

It was Solzhenitsyn, raised in an atheistic, communist society, who reached his conclusions after observing what the tyrants of his society did to people. Of course, he also was informed by a Christian worldview.

Charles Colson of Watergate fame visited the Soviet Union and its prisons. He found himself at a negotiating table with Vadim Viktorovich Bakatin, the Minister of Internal Affairs and the fourth-highest ranking official in the Communist Government.

Bakatin candidly told Colson of the crime problem in the Soviet Union, with crime increasing by 38% in 1989. Colson’s candour was as devastating as Bakatin’s admission of the crime situation:

I told him that crime is not caused by economic or political or ethnic factors. It is caused by sin — by the fundamental evil in the human heart.

In a system that rejects God, there can be no transcendent values or authority to which people are accountable — so one can only reasonably expect unfettered human behavior. And that means crime.[viii]

This message was similar to that of another Russian writer, Fyodor Dostoyevski in The Brothers Karamazov, “When there is no God, everything is permitted. Crime becomes inevitable.”[ix]

Since this is the case, R. C. Sproul’s assessment is not that shocking after all: “If you think about it, we are all really more like Adolf Hitler than like Jesus Christ.”[x] Christopher Browning wrote a very distrubing book, Ordinary Men, in which he “conveys to us that it was not a few brutes, but many good and ordinary men, who committed murder for Hitler.”[xi]

Are there solutions to the problems that are rocking our society?

These are personal problems such as crime, marriage breakdown, violence towards family members and others, sexual and domestic abuse, children’s rebellion and delinquent parents.

We have problems in society such as injustice, discrimination, poverty, war and hatred. Paul Wilson raised the crime of “three Bosnian Serb soldiers [who] became the first men to stand trial for using rape and sexual enslavement as weapons of war.”[xii]

There is sense in what Paul Wilson writes: “The recognition of past evil acts is a precursor to stopping future acts involving genocide and other forms of violence against individuals or groups.”[xiii] He approvingly quotes the Dalai Lama when dealing with the essence of evil: “Forgiving but not forgetting.”[xiv]

However, this does not deal with the core of our problems!

As to the solution to the problem, Solzhenitsyn said what is outlandish in our day, “If I were to identify the principal trait of the entire twentieth century, I would repeat once again, ‘Men have forgotten God.’”[xv]

There is a solution to the problems in our society and for us personally. It involves an accurate diagnosis of the problem of every human being — sin–something that is anathema to today’s postmodern worldview. Recognition of past evil acts will not penetrate to the core of the sin problem. The sin problem is a spiritual issue requiring God’s cure. But how will we ever get to dealing with the sin problem when there is such a public aversion to such an explanation? Our secular society has rejected that which provides ultimate answers.

Martin Luther was spot on when he said that “the ultimate proof of the sinner is that he doesn’t know his own sin. Our job is to make him see it.”[xvi]

The solution to personal and society ills is that given by the Lord Almighty. It is called the Gospel of Jesus Christ. Truly it is “good news” (the meaning of the word, “Gospel”) Briefly, it involves these actions:[xvii]

1. There is something to admit.

You need to admit the core of your human problem — sin. Acknowledge that you have broken God’s laws, falling short of God’s standards, and rejecting his love and authority over us (see I John 3:4; James 4:17; John 3:18). At heart we are rebels and enemies of God and we need to own up to it.

2. There is something to believe.

The contents of your belief are not extensive, but they are demanding. Recognise who Jesus

is: He is God-man who has come to rescue us. That’s what the word Jesus means, “God to the rescue.” The Easter event is accurately described as the ultimate rescue.[xviii] This annual celebration reminds us that:

To follow Jesus Christ as a disciple is costly. Entrance to the Christian life is free, but it will cost you the commitment of your whole being for all of your life. Read Luke 14:25-35. You will be opposed as a minority movement. You are called to be “salt” and “light” in dark and depraved society.

What you need to consider can be summarised in three questions:

4. There is something to do.

You need to repent of your sin, ask Jesus to forgive you of your sins, and receive the gift of

eternal life by faith (see John 1:12; John 3:16). When you do this from the centre of your being (your heart), you instantly become a Christian and a member of Christ’s church.

Now you need to seek out a Bible-believing, Gospel-proclaiming church and seek for somebody or a group to help you grow in your new-found faith. This is called discipleship.

Welcome to the Christian family! A person who truly disciples you will define and teach a Christian worldview that influences and directs every aspect of your life.

At the beginning of this section, I said that the solution to personal and societal ills is that given by the Lord Almighty. It is called the Gospel of Jesus Christ. You might be objecting, “How will a personal commitment to Jesus Christ change society’s ills?” Changed individuals lead to changed societies. The born-again Christian must become involved in “salt” and “light” ministries in our culture. See Matthew 25:31-46 for practical examples of what this will involve.

William Wilberforce did it in Great Britain in his fight against slavery during the 19th century. William Booth of the Salvation Army led his denomination in a demonstration of “Christianity with its sleeves rolled up.” Tens of thousands of Christians are doing it in Australia today in ministries to the hungry, deprived, sick, aged, oppressed and other examples of social deprivation and alienation.

I have found this Christian answer not to be unscientific, simplistic or anti-intellectual. It is a perfect fit for what I see in my dark world. I encourage you to pursue the big answers that the Christian world view provides for the big problems we face as a nation.

[xvii] This outline of the Gospel is based on Michael Green, Evangelism through the Local Church. London: Hodder & Stoughton, 1990, p. 268 ff.