This article was first published in On Line Opinion, Peter FitzSimons: It may come back to bite you,  6 August 2019.

Who wants freedom of speech folks taking a stand for Israel Folau’s cousin, Josiah, who lost his job at a Roman Catholic College over his anti-Catholic rants?

I found his language hostile to his ‘religious friends, my champions of free speech’ who don’t treat Josiah Folau like Israel’s dilemma. FitzSimons was peeved: ‘You were apoplectic with rage at the very idea that Israel Folau could be sacked by Rugby Australia for twice putting up homophobic gibberish’.

His rage continued: ‘You shrieked, outweighed everything else, and his individual “freedom of speech” was so sacrosanct there could be no question of sacking him, even if it did piss off just about the entire rugby community, sponsors et al’.

This got up FitzSimons’ nose so he called for the ‘religious friends’ who opposed Israel Folau’s sacking to get behind Josiah:

‘We really need to hear from you now that Israel Folau’s cousin, Josiah Folau, has, as reported by the Herald, been let go from his casual teaching job at the prestigious Catholic school St Gregory’s College, Campbelltown, only a short time after describing the Catholic Church as “the synagogue of Satan”’.

1.  Is FitzSimons fighting for his enemy?

Seems to me that, without knowing it, he plays right into the hands of those promoting freedom of religion and free speech for employees, employers and other institutions – including the church, synagogue, mosque and other religious organisations.

This is what I have in mind: He has highlighted this important issue of the need for freedom of religion but without realising he is backing that position in his article.

The very thing he advocates – religious friends speaking out against the sacking of Josiah – is the issue that religious institutions across the country are battling to retain. The proposed Religious Discrimination Act in federal parliament is designed to address this matter. I have grave doubts it will concentrate on some concerns by religious institutions.

St Gregory’s College, Campbelltown NSW should have every right to hire staff that support the ethos of the College. When a staff member violates those religious principles, at the school or by promoting them elsewhere, termination of employment should be in order.

‘Freedom of religion is a pre-eminent international right. It deserves primary recognition and protection. Currently exemptions treat religious freedom as a mere afterthought. This is disrespectful and ungrateful in view of the great work faith-based services and institutions provide.

‘Since Australia is committed to the International Covenant on Civil and Political Rights, our nation should treat freedom as a positive right and not regard it as a narrow exemption’.

Josiah Folau deserves to have his work as tutor and boarding house supervisor concluded. He called the Catholic Church ‘the synagogue of Satan’ and ‘any devout Catholic person IS NOT A SAVED CHRISTIAN WHATSOEVER. Look at Catholic doctrine, almost 100% of it is false and is filled with lies. The blasphemous Catholic mass is a paganistic ritual rooted in heresy, evil and devil worship. Roman Catholicism is masked devil worship’.

Josiah Folau has contradicted the values of the church that employed him. St Greg’s College, if we truly had freedom of religion, should have every right to sack him whether he promoted it at the College or elsewhere.

Whether one agrees with this statement or not, it is contrary to Catholic Church doctrine. He has not upheld the values of a Catholic College.

So, instead of outrage over Josiah Folau’s termination of employment, FitzSimons and his religious friends who champion freedom of religion and free speech (and I’m one of them). We should commend St Greg’s for taking the stand of backing its values and hiring those who support the ethos of the Roman Catholic Church.

It’s time for legislation in Australia that allows all institutions the rights to choose staff based on values of the organisation. These employees should not go public with beliefs that are contrary to those of the employer if one wants to continue employment.

Here, here for Catholic and independent schools being allowed to employ staff to promote their ethics.

FitzSimmons’ complaint disguises the truth of the need in a free society to give all employers and other organisations the choice of a staff person’s values.

Could you imagine a Labor MP or Coalition MP not hiring pro-Labor or Pro-Coalition supporters in their respective local offices?

The bee in FitzSimons’ bonnet about the actions of ‘religious friends’ falls in a heap over Josiah Folau’s sacking. This is because his tirade against religious friends promotes the need for robust freedom of religion and free speech in Australian legislation.

3.  How does sport relate to religion?

I write as a committed evangelical, Protestant Christian who has a high view of the authority of Scripture.

I’ve heard from friend and foe in person or on Internet forums:

4.  What is Scripture’s exhortation?

In spite of folks in the public square wanting religious people to shut up about their faith, that is not what the Scriptures teach. The apostle Paul addressed an issue in the church at Corinth that is just as relevant today: ‘So whether you eat or drink, or whatever you do, do it all for the glory of God’ (1 Corinthians 10:31).

To give glory to God is to honour him with everything Christians do, whether on the job, in your family, and on the sporting field. Put simply, all sports’ people, whether religious or not, see their world, not as a private matter, but through the lens of faith – even secular faith. For me, that is through the lens of Scripture and its teaching.

Photo: via The Corrie ten Boom Foundation (Available from: https://www.biography.com/activist/corrie-ten-boom)

This was the faith of Corrie ten Boom, a Dutch watchmaker, who along with her sister Betsie, helped many Jews escape from the Nazi Holocaust in World War 2. These Jews were hidden in their house. She wrote about it in her famous book, The Hiding Place. Eventually they were arrested and sent to the Ravensbruck concentration camp.

There was no thought of private Christianity for Corrie and Betsie.

Neither is his Christian faith a secret for former Australian rugby league player, Kevin Naiquama, a Fiji International, who played for the Sydney West Tigers in the NRL. Naiqama was off-contract at the end of 2018 when he departed ‘Wests Tigers to take up a multi-year deal in the English Super League’ (Kevin Naiqama to depart Wests Tigers at season’s end).

He has John 3:16 tattooed on his chest and the scene of Jesus’ crucifixion and the Last Supper on his back.

St Helen’s (UK) wrote of Naiqama: ‘The religious scriptures inked across the chest of St Helens’ new signing Kevin Naiqama are passages from John 3:16 and Romans 10:9, passages which identify one’s faith in Jesus’ (Kevin Naiqama: My God My Land). 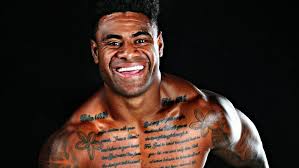 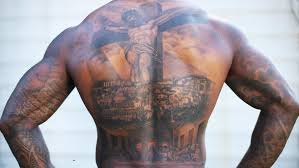 Kevin Nyiquama, tattoo of crucifixion and Last Supper on his back, courtesy dailytelegraph.com.au)

FitzSimons stated: ‘I think we have to go hard on defending Josiah Folau, or risk being made to appear completely ludicrous for our stunning inconsistency’.

You bet we need to ‘go hard’ at it to allow the Catholic College freedom to implement its policies against those who are on staff who oppose their values.