Let’s summarise what these letters promoted:

1. One said that it was amazing that government agencies, Centrelink and the tax department, allow same-sex relationships but ‘the government will not allow it’. This person found this to be a contradiction and considered that it was discrimination against homosexuals. Pollies need to ask: “Would they be in government without the votes of homosexual citizens?” This person did not think so.

2. The line taken by the second person, a father, was that he supported gay marriage because his son is gay and has found his ‘soul mate’. This son and his partner are organizing a wedding in Sydney for next year. Both families support this union ‘wholeheartedly’ and believe they should have the same right to marriage as anyone. Homosexuals can’t change and it’s a hard road when they experience so much discrimination. This son and his male partner will marry whether it is legal or not and celebration will be with family and friends. This Dad is ‘proud’ of his homosexual son and the son will live with his partner ‘as a gay married couple’.

3. We need to ‘move with the times’ and legalise same-sex marriage, said the third advocate of gay marriage. Because marriage has always been a heterosexual union, doesn’t mean it should continue to be that way. There were no votes for women, no IVF, etc, but “we live in the 21st century” and we should allow same-sex marriages, with the legal protections of a heterosexual couple.

A.  How should we respond to the promotion of gay marriage?

1. Not one of these writers or I would be here if same-sexual relations were the norm. It takes an ovum and a sperm (woman and man) to create a human being. Same-sex marriage will not do it. A contribution from the opposite sex, whether through sexual intercourse or IVF, is necessary for a child to be born.

A zygote is the initial cell formed when an ovum is fertilized by a sperm. An ovum from a female and a sperm cell from a male are needed to create a new human being. A zygote contains DNA that originates from the joining of the male and female. It provides the genetic information to form a new human being. Two males can’t achieve a zygote; neither can two females. It requires a joining of a male and a female in sexual union or through IVF. Shouldn’t this need for the genetic material from a male AND a female send an important message? Gay marriage will not do it!

Why? The lining of the anus is very much thinner than the much thicker lining of the vagina. The anus tears readily and thus makes that region of the anatomy more vulnerable to viruses and bacteria.

No matter how much some want to make same-sex marriage appealing, from the beginning of time marriage has involved the union of a man and a woman. If that link is broken, we don’t have marriage. It’s as simple as that. No claims like “I have a gay son”, “we must move with the times”, or “we live in the 21st century”, will change the fact that marriage is a heterosexual union.

B.  The intolerance of tolerance 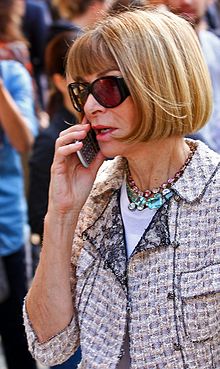 The Canberra Times reported that Wintour ‘has thrown her support behind the push to rename Margaret Court Arena over the tennis champion’s opposition to same-sex marriage’.

Wintour stated, ‘I find that it is inconsistent with the sport for Margaret Court’s name to be on a stadium that does so much to bring all people together across their differences”’, in a speech delivered at the Australian Open Inspirational Series in Melbourne on Thursday, to applause.

She continued: ‘This much I think is clear to anyone who understands the spirit and the joy of the game. Intolerance has no place in tennis” (Singer 2019, emphasis added).

I find it interesting when a person opposes the ‘intolerance’ of Margaret Court on the subject of homosexuality and doesn’t see her own intolerance towards Court’s view.

The Collins’ Dictionary (online) defines ‘intolerance’ as an ‘unwillingness to let other people act in a different way or hold different opinions from you’ (2019. s.v. intolerance).

That’s what happened with this example from Anna Wintour and her opposition to Margaret Court’s view on same-sex marriage.

It is a self-contradictory statement to accuse another person of intolerance while perpetrating intolerance oneself.

C.  What about these issues?

(1)   Mother and father are important for a child’s up-bringing. This Millennium Cohort Study: Centre for Longitudinal Studies in the UK found that

“children in stable, married families were said to have fewer externalising problems at age 5 than virtually all of those with different family histories. The most marked differences were seen for children born into cohabiting families where parents had separated, and to solo mothers who had not married the natural father. These children were three times more likely than those in stable, married families to exhibit behavioural problems, judging by mothers’ reports”.

(2)   God’s design from the beginning of time was for marriage of a man and a woman. See Genesis 2:24-25, “Therefore a man shall leave his father and his mother and hold fast to his wife, and they shall become one flesh. And the man and his wife were both naked and were not ashamed” (ESV).

Jesus Christ affirmed this passage according to Matthew 19:4-6, “He answered, ‘Have you not read that he who created them from the beginning made them male and female, and said, “Therefore a man shall leave his father and his mother and hold fast to his wife, and the two shall become one flesh”? So they are no longer two but one flesh. What therefore God has joined together, let not man separate’ (ESV).

(3)   Paul, the apostle, was able to speak of ‘men who practice homosexuality’ as being among those who were among ‘such were some of you. But you were washed, you were sanctified, you were justified in the name of the Lord Jesus Christ and by the Spirit of our God’ (1 Corinthians 6:9-11). In this list, homosexuals were placed among the sexually immoral, idolaters, adulterers, thieves, greedy, drunkards, revilers who were the ‘unrighteous’ who would not inherit God’s kingdom. But Jesus changes all of these people – even homosexuals. If you don’t believe me, read my interview with a redeemed lesbian, Jeanette Howard, “One woman’s journey out of lesbianism: An interview with Jeanette Howard“. I recommend her book, Out of Egypt: Leaving lesbianism behind.

Here are some more reasons to oppose homosexual marriage.

The homosexual sexual act is a revolt against nature. For procreation to allow for the continuation of the human race, a heterosexual liaison is needed. If homosexual sex were normal and practised extensively, the human race would be greatly diminished.

There is a natural factor: Which part of the body lubricates when stimulated: The vagina (through clitoris) or the rectum? The answer is obvious. The vagina is meant for penetration; The anus isn’t.

Genetic cause of homosexuality?

Governments may promote gay marriage: Should we as evangelical Christians?

[2] I sent a letter-to-the-editor to this newspaper, opposing homosexual marriage, but it was not printed.